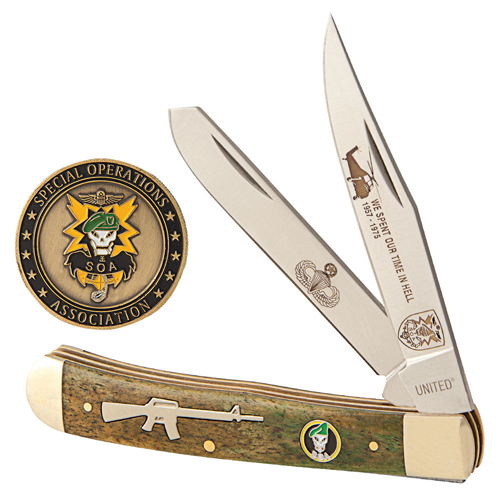 The S.O.A. was established in December 1977. For the most part, the S.O.A. is composed of U.S. Army Special Forces personnel and also includes USAF Air Commandos/FAC's, Navy Seals, Marine Raider and Force Recon personnel and veterans of other elite military organizations who were an integral part of Special Operations in the United States Military. This commemorative set includes a trapper knife and an S.O.A. challenge coin. Like all United Cutlery knives, this Special Edition knife has been honed to a sharpness not found among other manufactured knives. United Cutlery guarantees satisfaction with every blade purchased. This knife continues United Cutlery's tradition in excellence. Each knife is crafted with scrupulous detail and features polished green bone handles with a gun shield. The main blade is AUS-8 stainless steel, which has been intricately etched with the words, “We Spent Our Time In Hell 1957-1975.