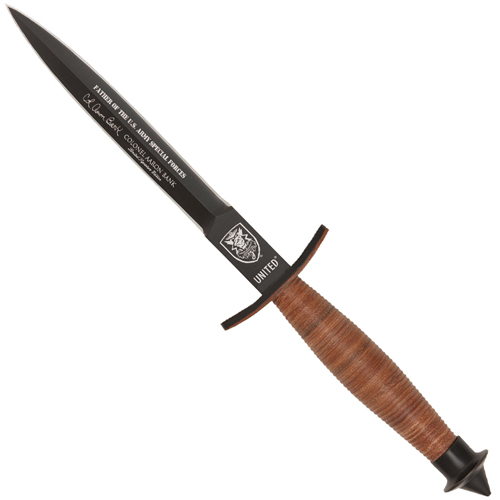 Colonel Aaron Bank, born November 23, 1902 , was an officer of the United States Army, and the founder of the U.S. Army Special Forces, commonly called "Green Berets". He is also famous for his exploits as an OSS officer during World War II, parachuting into France to coordinate and activate the French Resistance and organizing an operation intended to capture Adolf Hitler. Col. Bank is commonly known throughout the armed forces as “The Father Of The Green Berets.” He died on April 1, 2004 in Dana Point, California at the age of 101. The V-42 Stiletto was used extensively in many Special Forces branches as the primary fighting knife. This historically accurate V-42 stiletto replica features a stacked leather handle like the original, as to be easily handled in cold weather. Each dagger offers a razor-sharp, double-edged stiletto blade that pierces through even tough materials with ease.